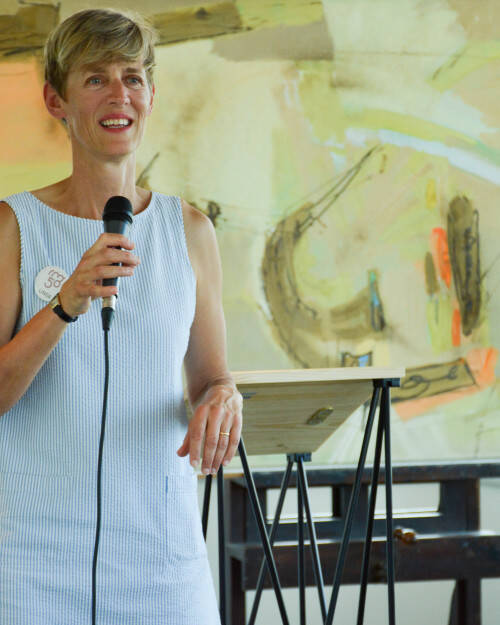 A curator`s task differs from person to person. For some, it means gathering a collection. For others, interpreting what is already there. For all, it means study of a chosen field, say trains if you are the curator of a railway museum. Then you dedicate yourself to preserving the physical legacy, history and experience of rail transportation within a chosen area.

At the Robert McLaughlin Gallery, the chosen field was more amorphous because it was Canadian Art, but only within a specific time frame, say the 1880s till today, and favoring a specific place, Oshawa and the region of Durham. Of course, choosing such a region meant choosing the influences on the art of that region, which could be quite wide and ranged from the Group of Seven and Painters Eleven, the main group founded in Oshawa, to artists of interest, though usually Canadian, everywhere.

A curator at the Gallery had, therefore, wide parameters. They also had limitations. As is usual in a regional gallery, these meant a meagre purchase budget. They also meant persuading the Purchase Committee of the wisdom of your choices.

Linda Jansma was at the Gallery twenty-eight years during which she battled against the boundaries, fighting to maintain professional standards and saving up her modest resources so that the collection was conserved and preserved properly.

She was not alone in her task, but she was essential, first as Registrar, then as Curator.

“Curator” comes from the Latin word curare, to care for. The curator cares for the collection, and that includes enhancing it, whether by gift or the magic of scholarship. Jansma expanded the understanding of the collection by organizing a major retrospective of Rody Kenny Courtice, a wonderful early modernist and friend of an artist important to us, Isabel McLaughlin. She added to our knowledge of another artist, Jock Macdonald, a member of Painters Eleven, by discovering a treasure trove of his early work in Glasgow. She interpreted it in the catalogue of a major show on the artist in 2014 at the Vancouver Art Gallery and was awarded the prize for best curatorial writing that year as a result. She also interpreted the work of several artists today who are of great interest, such as Ed Pien (known for his drawing-based installations), the challenging artist Nell Tenhaaf, and the collaborationists Jennifer Marman and Daniel Borins, organizing exhibitions of their work. She was on what is called the lead in her selection of these artists, or in the forefront of the realm of curators.

As for purchases – she loved the fact that she was involved in commissioning public sculpture by Mary Anne Barkhouse, Reinhard Reitzenstein, Doug Coupland and Noel Harding, as well as recent purchases of work by Sarindar Dhaliwal and Tazeen Qayyum.

She was as well as a champion of the important and interesting figures in Canadian art today, a person of inexhaustible energy.

Her work called on her enthusiasm and– and her intelligence. So often, if you went in her office, she was effervescent, and you were revived.

Long ago, in 1989, when she was hired, I knew Jansma could weather all difficulties when I heard that she had chosen as cover of our wedding invite, a drawing by Ray Mead that I`d curated into an exhibition. Her choice reflected her faith in art. From the moment I heard about it, I believed that she would be a great choice for a staff member.

In wonderment, these many years later, I realize I was right.