Since 2011 Ramune Luminaire and Judith A. Mason have been working on a series of collaborative drawings that explore experiences of relationship through mark-making.  Through a series of non-verbal exchanges, each artist takes their turn adding to what is on the paper. In time a composite image emerges; a visual dialogue of call and response.  The work organically grows into an art object, a visual text, saturated with traces of exchange, intuition, growth, development, collapse and re-development.

Extensions of this project have included staging the Conversation Pieces Café at Artspace in Peterborough, where artists were invited to work on several large collaborative pieces.  Luminaire & Mason see this as a potential model for building healthier personal and community relationships, a model requiring interdependence, not self-sufficiency.  Luminaire & Mason also facilitated workshops at RMG Culture Days in 2013 and 2014, inviting members of the pubic to converse on paper, co-creating mini-artworks in silence.

During the month of May Luminaire & Mason were the artists in residence in the RMG’s Art Lab. Their proposal was to create artwork in conversation with pieces from the gallery’s permanent collection. They selected works from the Go Figure exhibition. Below are extracts from the journal of their process.

Ramune: how do I have a conversation with an existing, completed, piece of work? By Morrisseau, an artist I love and admire?

Take my paper up to the gallery – blissfully silent, I am alone. Sit in front of the picture and meditate for 10 minutes, then open my eyes and just look at it for 10 minutes, breathing it in. My hand starts drawing a vessel, then I put in a shape familiar to me, the way I draw spirits in my journal. Two more figures and I realize I have drawn my mother, who died on Good Friday. The others in the boat are her (now dead) father and grandfather. I am drawing her journey into the afterlife. The bird is her totem animal, the snake a thing she feared. Decide to use Morrisseau’s colours and technique of framing each segment of the image in black paint. Makes me cry.

Judith:  Where to start?  Start with what is familiar.  Follow my hands, intuitions, thoughts – suspend judgement – no beginning, no end…..

I once copied a drawing of  A.Y. Jackson’s – a pencil sketch of dog team.  What I remember about my drawing was my father’s excitement about how well I had copied it.  My father, a good place to start.  I chose Jackson’s Indian Home, (1927) as my first conversation. I use three sheets of paper – a triptych.  I begin by drawing a house, my Cape Breton summer home, not unlike the house in Jackson’s painting.  I remember the gentle rolling hills, the sea, the wind, Island storms – Island weather.   I draw the pond just below the house, the fire pit, the sound of the nearby poplars, the apple tree, the sharp needled hawthorn that supported my clothes line, the large maple trimmed to allow for the hydro line.  I draw from memory across three sheets of paper, bits and pieces, scattered here and there, without applying the proper rules of perspective.  My memory is scattered, it flints about, hardy landing before jumping to the next.

I go back to Jackson.  I scan, then, study, his landscape.  I look at the colorful and shapely vegetation, the crudely painted pine trees, the clouds, the wind, the buildings, and finally the three figures standing outside their home.

I mix up the order of my triptych.  Then, on top of my chalk pastel landscape I paint out areas in black, break the scape, make abstract what began as representation, create dead areas, deep space.

I look again at Jackson’s painting.  What is interesting here?  Can I honestly say, not “the Canadian landscape”?  That strange preoccupation has ever interested me. I am much more interested in the inner world – a place of relationships – the world of feelings, emotions, sensations, connection.  My eyes settle on the small figures caught in the all-encompassing landscape – is this a mother with her two children?

My eye is drawn to these three figures.  I draw them on two sheets of my disordered triptych, on the surface of my blacked out and coloured pastel abstract – immediately the abstracted landscape becomes a home and a family.  But who’s that lurking in the bushes, in the vegetation out front?  On the third sheet of paper I draw a window blind.

I begin a sketch of a section of the painting, getting to know all its relationships every curve, shape, form, mass.  My eyes fluctuate back and forth between the positive and negative.  I need to know both spaces in order to get this drawing right.  I need the dark and the light.

Ramune: I decide to work with Suzy Lake’s photographic piece because I really don’t like it, it makes me angry.

These photos are too calm, not enough struggle, she’s not really trying to get free. Even the graphite bindings Lake’s drawn on the prints look weak. You want to feel bound? I’ll show you how that looks. I make a gel medium transfer of one of Lake’s figures onto my page and scribble it solid. Her images are extended upward, mine becomes a column. A structure that’s preventing the women bound to it from moving forward. Nice girl trying to free herself. Even angrier, I keep working and my image becomes a frenzy of energy. If I draw myself free, can I extend the gesture to Lake?

Judith: I have been looking at both the Georgia O’Keefe photograph and the large blue painting of the young woman on the staircase.

Ramune: I find this portrait compelling.

It’s a portrait of an activist for people with disabilities. He’s wearing a built-up shoe. I just bought a pair of sandals to wear to a wedding with platforms that are almost identical, but I wear mine in an effort to look more beautiful. They are my first response to Wolff’s image – to draw my own leg in the wedding platform. I won’t work from a photo as I think it deadens the image. Why didn’t this artist just exhibit the photo? I’m never sure about the point of photo realism. One leg drawn, who else am I? A lot more than the woman in the debilitating girlie shoe… I find the boots I bought when I first went to art school. I wore them with a mini skirt because I thought that would make me look like a real artist. Then they became my sculpture studio boots. Now they’re my motor bike boots. The leg wearing them looks entirely different – more masculine. When I look at Wolff’s laces I realize he’s photographed his subject’s feet upside down. Why? Now I have to work from a photo, not the real thing. Feels so different, but I love who I am when I see the finished image. Wonder if Wolff’s portrait made his subject love himself more.

Judith: I find myself working with these two images simultaneously.

Shaun Downey (2013) Large blue painting of a young girl descending the staircase at the Drake Hotel in Toronto.

Photograph of Georgia O’Keefe in her studio

I paint two paintings on the 3 ft X 3 ft canvases I brought into the studio.  Each of my paintings relate to one of these artworks.  A gift has been bestowed.  I step out of the way.

I look at Georgia sitting in that seemly dark room accompanied by two large organic objects.  I want a make her and these two objects out of clay?  I begin to sculpt them.  There are obstacles.  I am looking at a two-dimensional photograph and sculpting a three-dimensional object.  There are missing bits of information; the object I am forming is not fully formed.  I remember Rodin’s Gates of Hell, I think about reliefs – as objects in the midst of transformation.  As Hannah Arendt suggests, as objects manifesting.

I look again at the photograph and decide to fold black paper back and forth like a fan. This gesture leads me to the image of an old fashioned camera – of her husband’s camera?  I decide to make an old-fashioned camera out of board, paper and masking tape.  I want to place the three sculptural forms inside the camera.  I want to place her inside the camera.   My whole life feels as if I am living inside a camera.  As a woman I live a life under constant scrutiny.  Even if no one is still watching, I am watching myself.

Make ten large old-fashioned cameras.   Set up the space inside each camera as an interior room in a house.  In each room place a woman with objects from her life.

We are all living inside a camera.  Surveillance and Servitude.  A future exhibition.

The girl stands on the landing in the stairway casting a shadow on the wall.  I only notice the shadow after days of looking at the painting.  She looks like a cut out, a paper doll, a childhood activity I loved as a young girl.  On holidays, buying a book of paper dolls.  The delight of following the bold black lines with my scissors, first the dolls, then the clothes, each outfit complete with folding tabs.

I go up to the exhibition and look at the painting again.  I am interested in the shadow.  I begin to paint the young woman with her shadow on my abstract ground.  Then a third figure appears, this one unclothed, raw and vulnerable. Then, I think about painting her out of her dress, leaving her dress suspended in air, having her standing naked beside it.

The conversations stop, the residency is over.

John Di Leonardo is our Art Lab artist in residence from June12 until September 3, 2018. During his residency in the Art Lab, John Di Leonardo will be researching the nude theme within Canada’s artistic history, and also will be drawing to create a body of work that explores questions of the nude image as […] 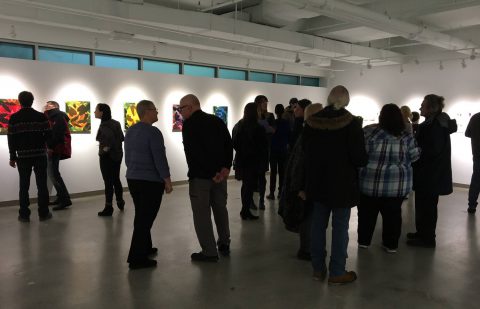 By: Raechel Bonomo Interview with Anastasia Hare RMG Art Lab Residency: What Arises in the Process, December 6 – 30, 2016 Gallery A Exhibition: In Time, January 5 – 29, 2017 Participating artists: Katie Bruce, Jennifer Carvalho, Rob Nicholls and Sarah Sands Phillips   The relationship between the curator and the artist is one of complexities and […] 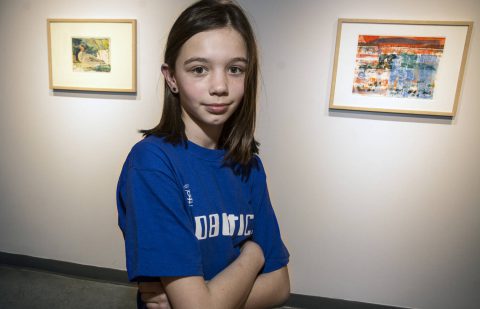 Sigourney Baker is a 10-year-old junior curator at the RMG. The junior curator program explores the world of art galleries and exhibitions. The program gives kids the opportunity to learn how to develop themes while given a behind the scenes look of how an exhibition comes together. While exploring works from the RMG’s permanent collection, […]