Organized and circulated by the Carleton University Art Gallery, Ottawa

Governor General’s award-winning artist David Rokeby has been at the forefront of interactive media art for over two decades. Throughout that time, his piece Very Nervous System (1986-2004) has been central to the development of his remarkable interdisciplinary creative practice.

First developed in the mid 1980s, when interactive art, sound art, and computer-based art were in their infancy, Very Nervous System uses video surveillance technology, synthesizers, a sound system, computers, and image-processing software designed by Rokeby to translate movement into music and/or sound. This section of the gallery may appear to be empty, but as you move through the space, your movements are monitored by a ceiling-mounted video camera. The video signal is routed to a hidden computer where the image processor converts your movements into sounds that are played back into the space through the sound system, creating a biofeedback loop between your body and the machine.

Through an intuitive process of improvisation, kinetic experimentation and creative play, you can use your body to sculpt the sound, opening a critical space to reflect on the inherent tensions and contradictions between the extreme logic of the computer binary code that underpins the piece and the intuitive, improvisatory gestures that activate it. The piece also inverts the traditional relationship between movement/dance and sound/music: instead of the body responding to music, the movements of the body actually produce the sounds and orchestrate the piece. The work thus functions as what Rokeby has called a “transforming mirror,” both reflecting and refracting our actions in space and time as well as our embodied sense of self.

Very Nervous System has undergone several transformations over its twenty-five year history. Advances in video technology and image processing capabilities have made the work much more sensitive. Where earlier versions of the work responded best to large, dramatic gestures, the current version presented here responds to minute movements, creating a heightened sense of intimacy between the viewer and the work. The sonic dimension of the piece has changed too. In its early incarnations, the sound was more traditionally musical in nature, using different synthesizer patches to allude to a variety of musical traditions.

In recent years, these explicitly musical sounds have been largely replaced by more intimate sounds that do not signify particular musical or cultural traditions to the same extent – the sound of paper crinkling or the unrolling of duct tape, for example. Many of these sounds have a decidedly tactile quality, further complicating the interplay of gestural discourses involved in the work and further heightening the intimacy of the experience. You are encouraged to search for hidden sounds within the space, exploring the tactile, sculptural qualities of the sound. 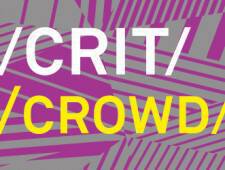