Holly King: Edging Towards the Mysterious

Holly King: Edging Towards the Mysterious

This ten-year mid-career retrospective of the photographs of Holly King is comprised of four of her most recent series: Twisted Roots, Mangroves: Floating Between Two Worlds, Grand Canyon: Unscene and the recently completed English Cliffs series. Two of the series more clearly represent her constructed work, while the other two are based more obviously in reality. King states that her photographs are a “celebration of sublime beauty in nature.”

While King is not out to deceive the viewer with her constructed landscapes, her sets have, until now, remained in the studio. With this exhibition, she has included two viewing boxes: elegantly designed cabinets into which one peers and sees a landscape built using forced perspective. Her meticulously rendered “rocks and trees” are visible for all, outside the context of her enlarged photographs. The box becomes a personal space for the viewer, a point of contemplation. King notes that with this structure, she hopes to “construct a partially believable poetic place.”

Montreal-based artist Holly King, manufactures both the beautiful and sublime and is interested in “the tension between artifice and illusion generated.” King has said that her work is a “search for a deep silence.” Her photographs, both constructed and real, serve, through a vastness of scale, depth of colour or the richness of the blacks in her monochromatic work, to allow the viewer to delight in the beautiful, and to savour the silence in the face of the sublime.

The RMG will also present Holly King’s photograph Chalk Shoreline in the windows of Core21, a co-working space in downtown Oshawa. This project is the first of a series of artworks in the windows of downtown businesses, and an on-going partnership with the RMG and Core21.

A 120 page, bilingual hardcover, publication will accompany the exhibition and be available at the RMG Shop and ABC Art Books Canada. The publication includes colour images, portfolios and essay by Francine Paul and Linda Jansma.

Born in Montreal, King studied visual arts at Laval University, where she earned her BFA in 1979. She then studied visual arts and modern dance at York University, completing her MFA in 1981. Her work has been shown both nationally and internationally and her work is widely collected, including institutions such as the National Gallery of Canada, the Montreal Museum of Fine Art, and the Art Gallery of Ontario among others. She teaches at Concordia University in Montreal. 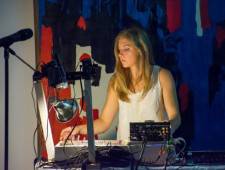