Laura Madera: The Angle of the Sun’s Rays 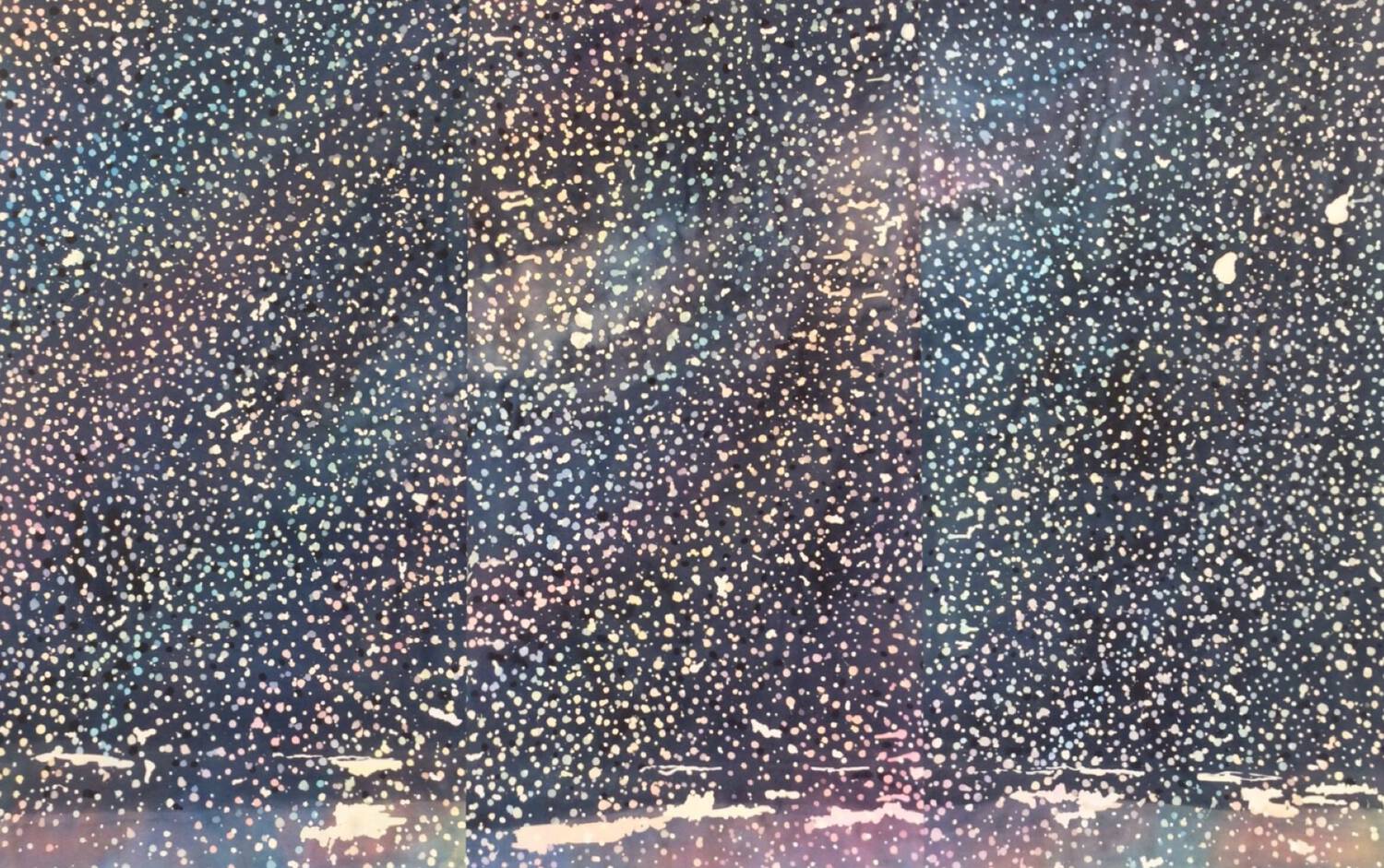 “You do not have to be good.
You do not have to walk on your knees
For a hundred miles through the desert, repenting.
You only have to let the soft animal of your body
love what it loves…”
– Mary Oliver from “Wild Geese”

As a creature, without devices, I cannot stare directly at the sun. I come to know it indirectly, through its light and heat. Perhaps this method of coming into knowing is true for other things seen and unseen?

The artworks in The Angle of the Sun’s Rays, each in their own way, poetically investigate primal energies of Nature by way of painting. They address obliquely the messy business (affection, anxiety, love, loyalty, fear, responsibility, hope) of being embedded in a field of vital interrelatedness. Through the use of wiping, washing, masking, revision, erasure and evaporation the work emerges over time in a generative process.

Made specifically for the Gallery A space, the artworks verge on installation and attempt to embody phenomena of light, atmosphere, growth and time within landscape. In this project, I consider the surface of the canvas to be a site to hold and inhabit. A site for the pleasure of making and looking, a place to cultivate conditions for embodiment and for being alone together.

I wish to gratefully acknowledge the support of the Ontario Arts Council.

Artist’s Biography:
Laura Madera received her BFA from Emily Carr University, BC and an MFA from the University of Guelph, ON. Her practice explores the potential of watercolour as a poetic means to investigate phenomena and form in relation to perception and place. Her work has been exhibited in solo exhibitions at Evans Contemporary in Peterborough ON, Monastiraki in Montreal QC, The Bakery on Franklin in Vancouver BC and is held in private collections across Canada, the United States and the United Kingdom. She was named as one of Canada’s most promising emerging painters by the Magenta Foundation. Born in Toronto, she currently lives in Peterborough, ON. She is a recipient of an Emerging Artist Production grant from the Ontario Arts Council and serves as a member of the Board of Directors at Artspace.

Reserving the Light: Steps to an Ecology of Painting
Written by Nadja Pelkey

“What is true of the species that live together in a wood is also true of the groupings and sorts of people in a society, who are similarly in an uneasy balance of dependency and competition. And the same truth holds right inside you, where there is an uneasy physiological competition and mutual dependency among the organs, tissues, cells, and so on. Without this competition and dependency you would not be, because you cannot do without any of the competing organs and parts. If any of the parts did not have the expansive characteristics they would go out, and you would go out, too.”

– Gregory Bateson, Conscious Purpose Versus Nature, Steps to an Ecology of Mind, pg 438

Laura Madera’s The Angle of the Sun’s Rays dissolves the distinctions between the working body and the body of work. Her practice is an ecology, a system of interdependent actions producing works that are at once enchanting and alienating. Working in watercolour, Madera has a sort of bifurcated methodology; some works – those on primed canvas, sit on the surface of the support. As thick as a warm breath they are stilled but remain eternally changeable. On paper the paint is absorbed directly into the support, into the fibers from which they can scarcely be separated.  Between the methodologies is Madera, carefully attending to the qualities of the materials she works with as she negotiates an understanding of the natural phenomena which informs her painting.

A conversation with her about the show – remotely, over a sometimes fuzzy internet connection – turns from painting to gardening to a radio program, a poem, someone’s ideas of retreating and living on the land, and back into the studio, landing on light. It seems to emanate from these works, as if they are glowing. Snow Static Stars is as confounding as it is beautiful – Madera talks about finding ways to “reserve the light” in her studio practice. She says “you cannot hold light, it’s so transient”, and yet she’s found a way to resist the paint seeping into the brightest fibers. Lichen Island uses the absence of material, of paint, as central, the undisturbed surface forms the subject and reverberates between the glowing absence and an acidic palette.

The ways in which Madera works in her studio, (a converted out-building beside her house) she likens to gardening. Preparing the paper supports as if she’s tending soil, carefully creating the necessary conditions to grow her work. The process is slow, especially with the larger works and requires a great deal of patience on her part – there is a lot of waiting, evaluating, intuiting, and considering. Madera is adept at developing inventive ways of working with an elusive material. She doesn’t situate herself in a position of mastery but rather in a dialogue between her and the material, informed by a wholistic approach to the observation and research of natural systems and phenomena. Madera mirrors the processes of the systems she examines in a fashion that is more biological than pure logic.

The works on canvas have their own methodology, as the pigment sits on the surface, malleable, Madera is able to wash, and redact, layer, and remove. The interplay is more immediate and gestural. Tall Trees is abstracted and geometric, alluding visually to the entropic remains of Bertram Brooker’s Vitalism. In Hail and Rose moon and grasses the light is a scar on the surface of the work. The canvas works are discrete in size, and zoom in and out in imaginary scale from the cellular and the interstellar. Bump bump is a complicated work that challenges the thin fact of watercolour with an expansive depth. Bodily and geographical it is representative of the multiple territories Madera’s paintings occupy.

Madera is in league with artists like Lucia Nogueira, and Amy Sillman carefully attending to the inherent qualities of materials as they use their work as a means of wayfinding within the larger world with a sense of perversion and humour. The exploration of phenomena isn’t a sterile, lab based exploration – it’s ameoba sex, it’s coincidence and observation and communication. The ecology is just as served by what can falter as what can be clearly expressed. When everything is interdependent everything counts.