Nurses Exhibition: A Profession of Care 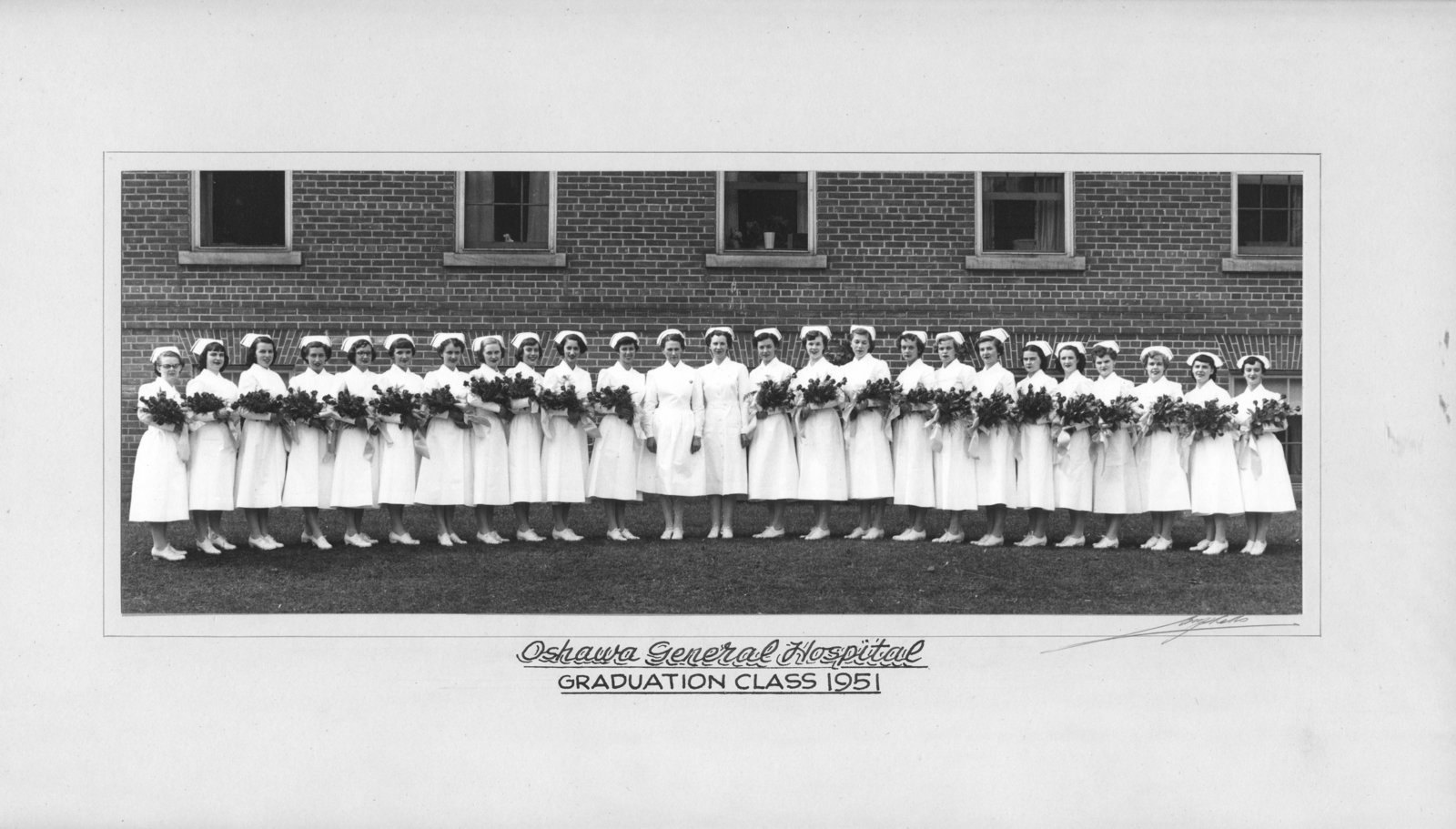 A Profession of Care: A History of Oshawa General Hospital’s School of Nursing

During this global pandemic, nurses are needed more than ever. They are essential workers in our health care system whose courage and dedication should be celebrated during normal times, let alone in the midst of the current crisis. Created in partnership with the Oshawa Public Libraries and the Oshawa Museum, this exhibition looks back at Oshawa’s history of training nurses, through the Oshawa General Hospital School of Nursing, to salute healthcare workers everywhere and celebrate their exceptional skills.The Oshawa General Hospital School of Nursing was established shortly after the first hospital building opened in 1910.

During this time, hospital-based nursing schools were opening across Canada. Demand was high for new nurses and the brochures advertising the schools would specifically target young women, often outlining requirements for entry such as, “women of superior education and culture.”

The three-year program at Oshawa General Hospital had its first three graduates in 1913, with the graduation ceremony held at the Oshawa High School (today O’Neill Collegiate & Vocational Institute), a tradition that continued for many years. Life in the early years of the training program was arduous—twelve-hour shifts, seven days a week, with four hours of free time on Sundays. Since there were no tuition fees, students were expected to fully integrate into hospital life, supporting doctors and patients around the clock. Beginning with classroom training, students would then get hands-on experience working alongside doctors and nurses with patients from various departments such as maternity, surgical and pediatric.

The first students’ residence was composed of a few small rooms in the attic of the hospital. Later, a residence was built at 47 Alexandra Street that had a capacity to house forty nursing students. The school grew in the 1920s, which led to the need to fundraise for an addition to the residence. A campaign in 1922, led by the Women’s Auxiliary, raised $15,000 to build 10 more rooms.

In the 1940s, enrollment continued to increase, and the school was in desperate need of more space. Colonel and Mrs. R.S. McLaughlin donated the funds to build a new nurses’ residence. In November of 1947, McLaughlin Hall opened and was described as being among the finest of its kind in Canada. It was also during this period that new educational requirements for enrollment were established, including Secondary School Diploma credits in mathematics and sciences.More renovations were needed in the 1960s to further accommodate the growing school.

The basement of the Oshawa General Hospital, known as the “A Wing” became the new School of Nursing. In addition, the Minister of Health for Ontario changed all three-year nursing programs to two years in order to meet the demand for nursing professionals and began to experiment with standardized curriculum. Hospitals were reluctant to make changes to the programs as each hospital had individualized training programs, and were used to the reliable and inexpensive workers.

As healthcare technology advanced, nursing schools had to adapt. In 1973, the Ontario Government closed hospital-based nursing schools and shifted training to college or university-based programs. As a result of the changes, Oshawa General Hospital’s School of Nursing closed and the program was transferred to Durham College.

In its 60-year history, the Oshawa General Hospital School of Nursing had 1,198 graduates. Throughout the years, the school grew and evolved to keep up with the ever-changing healthcare system and contributed greatly to the community’s overall healthcare services. This exhibition celebrates our local history and is a small gesture to honour the incredible work our current healthcare workers do everyday.

Two nurses are seen on the front steps of the first Oshawa General McKay is standing beside an automobile owned by Dr. Rundle.

“Student nurses are to be found everywhere, underneath, on top of, running around, jumping over or slithering past patients’ beds…” – Unknown, 1963 Year Book

Miss MacWilliams, the Lady Superintendent of the Nursing School, stands on the right of the 1925 graduating class.

Group of nurses holding newborns in the maternity ward. The nurses in the training program received hands-on experience working in various departments of the hospital, including maternity and surgical.

After coming off duty from the night shift, two nursing students, Miss Hinton and Miss Thompson, have some fun fooling around on the grandstand at Alexandra Park.

The nurses-in-training lived in residences on the hospital grounds. As the school grew, so did the need for most residence space. This cafeteria is believed to have been located in McLaughlin Hall, a state-of-the-art facility at the time.

View from behind a group of nursing students posing for a photo outside the hospital.

Built in 1946 as a result of a donation by Mr. and Mrs. R. S. McLaughlin, this nurses’ residence was officially opened in November of that year. Its original address was 362 Simcoe Street North, which is now 1 Hospital Court. The building is currently used for the administrative offices of Lakeridge Health Oshawa.

This student nursing uniform belonged to Miss G. Gorsline when she attended the School of Nursing in Oshawa. Comprised of a blue and white pinstriped cotton dress with a white bib and apron. The uniform also included starched stiff white cuffs and a collar, white stockings and white shoes. There were strict rules regarding a nurse’s appearance in uniform. Student nurses were only allowed to wear their complete uniform while on duty or during classroom lectures.

Award winners of the class of 1968 pose with rose bouquets outside.

Nursing students received a well-rounded education by assisting and learning from doctors and nurses from various departments. Seen here is the Surgical Department.

This photo appeared in a 1962 brochure about Oshawa General Hospital’s new Sykes Wing. It depicts the Children’s Floor that had 88 beds exclusively for children. In the brochure it says: “Sick children need comfort and assurance. More than ever they require love and affection…a feeling of security and a faith that they will be guided back to health by the tender care of their nurse and professional skill of the doctor.”

This image appeared in a brochure launching the official opening of the new Sykes Wing. The Sykes Wing featured a large nursery and children’s ward.

Despite the closure of the hospital-based nursing school and the transfer of the program to Durham College, students still received clinical experiences at Oshawa General Hospital in the program. This photo appeared in a brochure celebrating the official opening of the “G” Wing on October 10, 1973. The caption above the photograph says: “Constant watch in the Recovery Room.”

Despite the closure of the hospital-based nursing school and the transfer of the program to Durham College, students still received clinical experiences at Oshawa General Hospital in the program. This photo appeared in a brochure celebrating the official opening of the “G” Wing on October 10, 1973 with the caption: “Tender care is part of bedside nursing.”

This online exhibition was created in partnership with Oshawa Public Libraries and the Oshawa Museum.