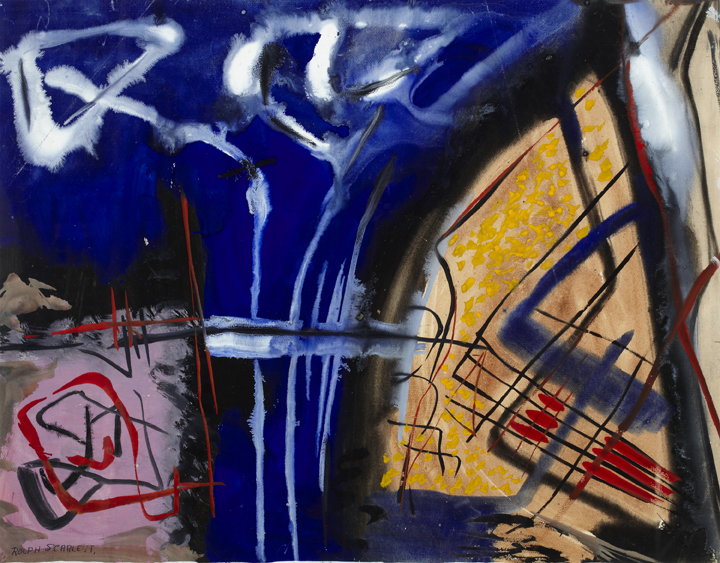 “The searching non-objective artist does not turn to nature for inspiration or direction; rather, he looks within himself, within his own soul, as he strives to cultivate that spark of inner vision which lies latent in all of us.” – Rolph Scarlett

Artist Rolph Scarlett described abstraction as the highest form of creative expression and wrote in-depth about his search for pure form. Born in Guelph, Ontario in 1889, Scarlett was a modernist painter, designer, and jeweler. He moved to New York City in 1908 where he studied briefly with the Art Students League before relocating to Los Angeles where he worked as a set and industrial designer.  In the 1920s, while on a trip to Europe, Scarlett met Paul Klee who encouraged him to experiment with spontaneous abstraction. After settling in New York City in 1937, Scarlett befriended Hilla von Rebay, the first director of the Guggenheim Museum and a champion of abstract art. Through this friendship, Scarlett would become dedicated to modernism and became a lecturer at the Museum of Non-Objective Painting in New York (later renamed the Solomon R. Guggenheim Museum). His early non-objective works show clear influence from Klee and Kandinsky, often featuring geometric elements, bright colours, and a rhythmic style. While the aesthetic interests of his inner circle, including Hilla Rebay and Rudolf Bauer, were focused on the expression of the spiritual through abstraction, for Scarlett it was about aesthetics and universal order. He was a prolific painter, who continued to explore abstraction until his death in 1984. His work is in many public and private collections including the Guggenheim Museum, Brooklyn Museum of Art, Los Angeles County Museum of Art, and the Montreal Museum of Fine Arts.

This exhibition features eleven works by Rolph Scarlett recently acquired by the RMG. These paintings exemplify a range of styles from geometric abstraction to his later looser and more expressive approach. The RMG continues to be committed to telling the story of modernism in Canada, and Rolph Scarlett played an important role in this history through his contributions to abstract art in North America.