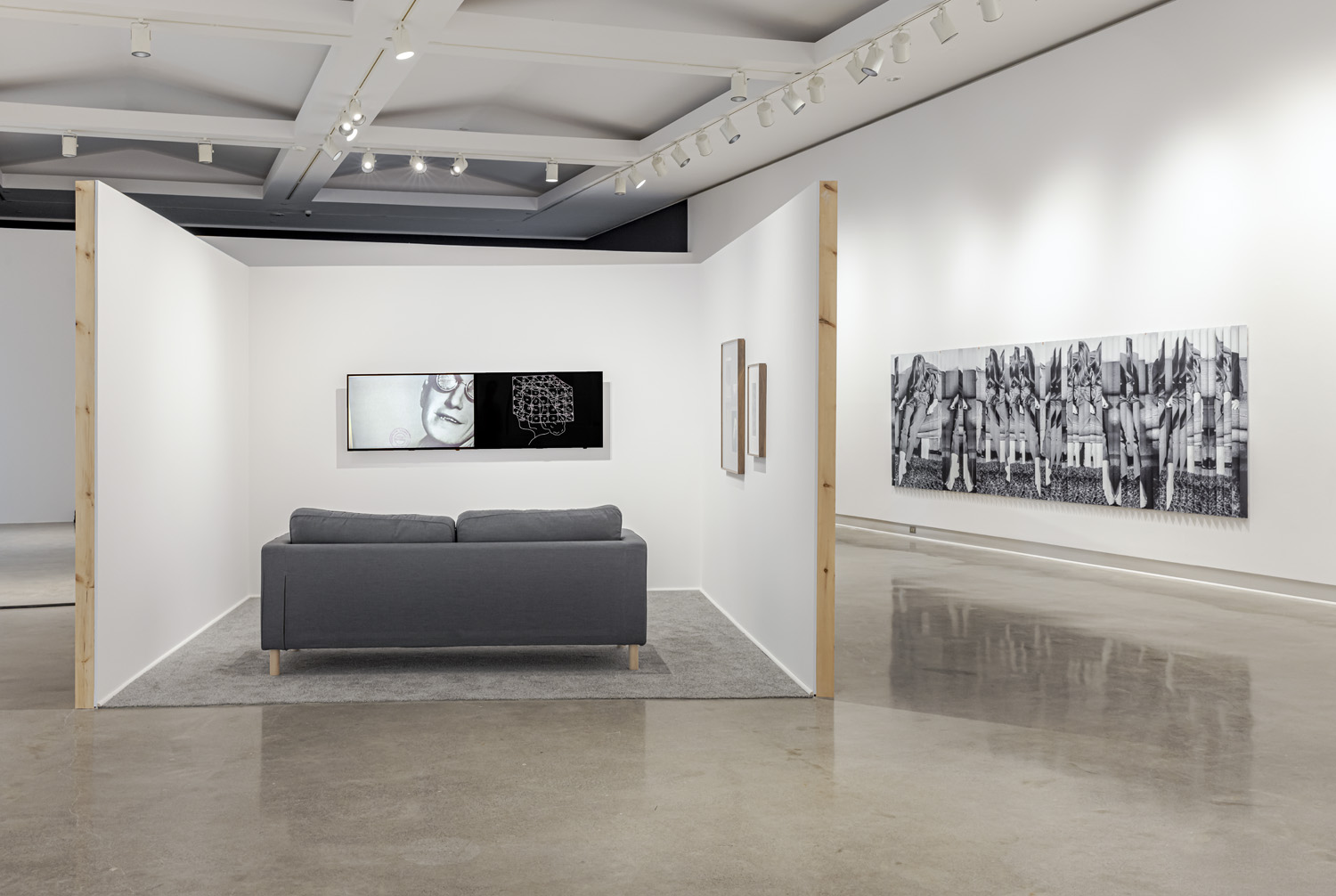 Organized and produced in partnership with the Kitchener-Waterloo Art Gallery.

This exhibition opens at Illingworth Kerr Gallery in Calgary, January 19, 2023

As a surface with only one side, the Mobius strip resists orientation. To trace its surface is to experience left becoming right, outside flipping in, and time assuming the shape of an infinite loop. While its perimeter is defined, it is the twist in the loop that prevents predictability. Within static institutions and other familiar containers, is it possible to experience a similar twist – a radical detour – that encourages us to build our worlds anew?

Underpinned by feminist conceptions of the everyday as a basis for political engagement with the world, The Beyond Within proposes strategies for reorientation. In two videos made in collaboration with Paris-based artist Maïder Fortuné, pedagogical roles are underwritten by radical forms of intimacy. OUTHERE (For Lee Lozano) incorporates documentation from a 1971 lecture at the Nova Scotia College of Art and Design alongside archives and an astrological reading to give form to an influential recluse: the late conceptual artist Lee Lozano. In Communicating Vessels, friendship and artmaking become productive, if precarious, portals through which to escape the isolation of the self.

Psychedelic experience as a means to dissolve the ego and yield new models of collectivity is central to the new installation, Set and Setting. This work is informed by historical and contemporary psychedelic trials performed within research settings. Juxtaposing animated drawings sourced from early trial documents and architectural sets that recall institutional examination rooms, Set and Setting suggests that the boundary between subject and viewer is not only thin, but porous and continuously shifting.

By making use of radical and lateral modes of thinking and storytelling, MacDonell affirms how art can be both a necessary clarifier and serve as an essential tool in world building.

Annie MacDonell is a visual artist and filmmaker. Her early training was in photography, and the image continues to play a central role in her projects. Her work also includes installation, sculpture, writing, and performance. In recent years, film has become a focus. Her films (sometimes produced with collaborator Maïder Fortuné) are shaped by feminists principles of politics as a daily practice. .

She received a BFA from Ryerson University in 2000, followed by graduate studies at Le Fresnoy, Studio National des Arts Contemporains, in France. Her films “Book of Hours” (2019) and “Communicating Vessels” (with Maïder Fortuné, 2020) have screened extensively internationally. Recent solo shows have been held at Gallery 44, Parisian Laundry, the AGO, and the Art Gallery of Mississauga. She has participated in group shows at The Art Museum of the University of Toronto, CAG Vancouver and Mackenzie Art Gallery. Recent performances have been presented at Nuit Blanche Toronto, le Centre Pompidou and the Toronto International Film Festival. In 2012 she was short-listed for the AGO AIMIA prize for photography, and she was long listed for the Sobey Art Award in 2012, 2015 and 2016. In 2020, she and Maïder Fortuné won the Tiger Award for Best Short Film at the Rotterdam International Film Festival, for their film “Communicating Vessels”.

Installation of Annie MacDonell: The Beyond Within at the Robert McLaughlin Gallery, 2022. Images by Toni Hafkenscheid.