Vessna Perunovich: Neither Here Nor There

Vessna Perunovich was born and raised in a state that no longer exists. Although she has departed from ex-Yugoslavia more than 20 years ago, the theme of exile and longing are still being echoed in most of her work. From the time she started her career in Canada in 1988 until today, she has worked in a diverse range of media, including painting, drawing, installation, sculpture, video and performance. Neither Here Nor There is the first survey exhibition of her video works, presenting artwork realized in the last seven years of her practice.

The installation Neither Here Nor There is a collection of eight video works in which Perunovich plays with her own position in the border space of her identity. Exploring the notion of place and its complex and contradicting nature to both entice and alienate, Peruovich situates herself in relationship to environments, both real and imagined. A Toronto-based visual artist, Perunovich has exhibited at numerous international biennales in Cuba, Albania, Portugal, Yugoslavia, Serbia, Montenegro and Greece.

Vessna Perunovich is a Toronto-based, internationally acclaimed interdisciplinary artist who works in a variety of media including sculpture, painting, drawing, video, installation, and performance. Born in 1960 in Serbia, she earned both her Bachelor of Fine Arts (1984) and her Master of Fine Arts (1987) at the Academy of Fine Arts at the University of Belgrade, Yugoslavia. She immigrated to Canada in 1988.

Perunovich has exhibited at International biennials in Cuba, Albania, England, Portugal, Yugoslavia, and Greece as well as across Canada. She has attended residencies in Berlin, New York, Banff, Bursa (Turkey), and Mileseva (Serbia). Her survey exhibitions Borderless and Emblems of Enigma toured prestigious galleries and museums across Canada and Europe. Her work has been reviewed in numerous magazines and periodicals, including Canadian Art, Espace Sculpture, World Sculpture Magazine, Umelec, and Border Crossings among others. Perunovich is a recipient of numerous awards, including the Toronto Friends of Visual Arts (2005), Canada Council for the Arts, Ontario Arts Council, Toronto Arts Council Grants and Chalmers Development Grant. Her work is included in many public and private collections, and is the subject of two monographs: (W)hole, 2004 and Emblems of the Enigma, 2008.

Perunovich is a sessional teacher at the Ontario College of Art and Design and she has lectured at various schools and Universities including the University of Guelph, Academy of Fine Arts in Belgrade, Faculty of Arts and Letters in Havana, Cuba and others. She is an Artistic Director for the Toronto Arts & Fashion Festival [FAT]. Vessna Perunovich is represented by Angell Gallery. 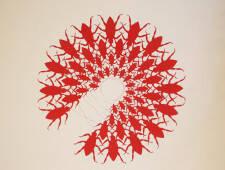