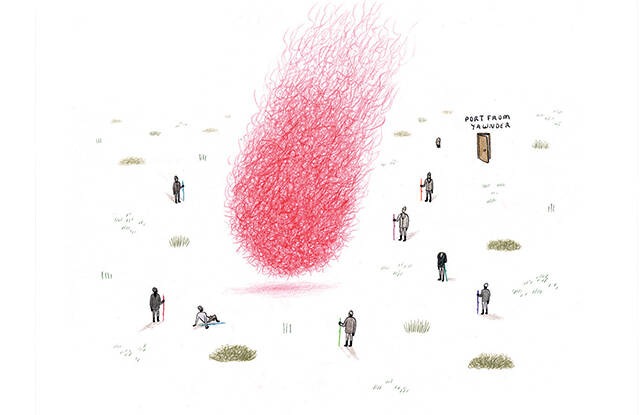 The Process of Imagination: An Interview with Jay Dart

How many times have you gone to write a story or paint a picture to find yourself staring at a blank screen or canvas for what seems like eternity?

This process of an artists struggle to grasp a familiar but unique concept within their work is the underlying theme of Jay Dart: Greetings from Yawnder!, exhibiting at the Robert McLaughlin Gallery.

In order to further explain his creative process, Dart formulated words such as “Yawnder”, which describes a mystical place where ideas are born. This imaginative world sets the scene for the exhibit where we follow Jiggs, Dart’s lumberjack-esque alter ego, through lands riddled with Geist Trees and Foredad Clouds. These mythical elements seeded in Dart’s mind are brought to life through not only his illustrations, but through installation, allowing you to embody Jiggs as you walk through alongside the protagonist.

Viewing this exhibit left me in my own state of Yawnder, inspiring me to dig deeper into the artist himself and what creative process means in its most primitive and natural essence.

Raechel Bonomo (RB): What is your first artistic memory?

Jay Dart (JD): I drew a lot as a kid. I had a lot of time to myself. I often recall the floor plans that I made for imaginary estates and mansions – probably influenced by the blueprints that my dad had lying around. Those were some of my first paracosmic pieces.

RB: Has creativity been something you’ve struggled with or something that has always come naturally to you?

JD: There have definitely been times when the airwaves were silent. And quite often these days, I’m too busy to go over Yawnder. But it’s always been apart of my life. Lots of sketchbooks filled with ideas over the years. Nowadays, when I get time to work on a drawing, I have a log jam of ideas that are just waiting to get done.

RB: Explain your creative process, how do you reach your Yawnder?

JD: This is your toughest question for me to answer. Inspiration strikes all the time… driving to work, playing with my kids, listening to music, surfing the internets. I make a lot of scrawls in notebooks, sketchbooks and sticky notes. When it comes time to make a drawing, usually for a looming deadline, then I look over my scrawls and figure out how to translate them into an image. Sometimes, I use an old photo as a starting point and turn that world into my own. Other times, it’s like something I’ve never seen before so I have to rely completely on my imagination to create the scene. One thing’s for certain, there will be lots of erasing cuz if the line ain’t just right, erase er’!

RB: Have you always wanted to be an artist?

JD: These are the things that I remember wanting to “be”… ninja, hockey player, animator, photographer, filmmaker, art director, artist. In most of those cases, art is the common denominator.

RB: I read you’ve created more than 200 illustrations in the Wanderer of Yawnder series, when did you start this series and what initially sparked it?

JD: I began drawing again a few years after graduating from art school following many years of neglecting the medium I spent so much time with growing up. I believe my drawing of Barry the Mannalo, circa 10 years ago, set me on this path towards Yawnder. Following that, I was inspired by antique photos, my watercolour test swatches and the landscapes of north Durham. These are just some of the many influences that got planted in my mind and eventually grew into the various elements in the Wanderer of Yawnder series.

RB: Who is Jiggs and how do you and the viewer relate to him?

JD: Jiggs is my alter-ego, my muse and the main character of the WoY series. He’s a real good guy and very open to sharing his thoughts. He spends a lot of time by himself so he appreciates any visitors whether you’re a wonderer, an acquirer, a lumberer, an inspirer or a referrer.

RB: There are a lot of beards in this exhibition. What do they represent to you and why are they so prominent throughout your work?

JD: Whether you’re in the middle of the woods or the Stanley Cup Playoffs, a noble beard can represent a time of intense experience. But they can also represent a fashionable trend. For Jiggs, the magical mystery beard was the first idea that came to mind when he procured a geist from the Yawnder Lights. He wore the beard and contemplated the spirit that it bequeathed him. Eventually, he realized that this idea was too easy and he dug deeper, literally, into the ground and planted his beards to see what would grow.

RB: You discuss taking yourself away from technology and into more of a simplistic process of creating art, why is this and how do you feel it benefits you work? How does it hinder it?

JD: I just feel most comfortable with a pencil as my medium but it does work with my intention to tell a timeless tale relating to the nature of inspiration and creation. However, I’m very much interested in the ways that current technology affects the way creators make and share their work; this is a major theme of this series. Thus, I refer to photos from the past when settlers were forging their way on the frontiers of new found lands (to them at least) but I introduce magic realism elements that allude to cloud computing and social networking. To me, these innovations seem to present just as many challenges as opportunities. But I’m still learning.

RB: What are you hoping RMG visitors take away from your exhibition?