“I teach Scottish Gaelic – language and culture at the University of Ottawa (and)… I had this idea of putting together a band that fused Scottish instruments (bag pipes, Irish whistles), singing in Scottish Gaelic and (I) wanted to get re-involved with some of the folks I toured with in the 70s and 80s,” he said.

“The response we usually get is ‘we don’t know what’s going on, but it’s cool!’,” Waugh said. Some listeners get taken back to a place once forgotten, yet filled with love.

“…There might be something familiar for someone in the crowd (and they) say ‘oh my grandma used to sing that song when I was little,’ and it’s really exciting for those members of the audience because it’s a new spin on (these songs),” lead vocalist and musician Grant explained.

However, every blend doesn’t go down smoothly with everyone.

“The hardcore traditionalists don’t really like what we do because ‘we’re changing tradition,’ but we believe that no language or culture is static…we love the culture- we honour it, but we’re not stuck in the way things were done in the past,” Waugh said.

Despite some resistance, Fiuran does right by the culture they represent by putting their whole selves into the music.

“My upbringing wasn’t in the Scottish culture or even in Gaelic culture, but it’s super-duper intriguing- just learning the history, the beauty of the melodies, how passionate the songs are, it’s hard not to get hooked on it once you actually get into it…I feel very lucky that Randy invited me to be part of this project because it’s important for my spirit,” Grant said.

Fiuran plans to keep showing their love for Scottish culture by performing at First Fridays @ RMG -LEGACIES on October 6. 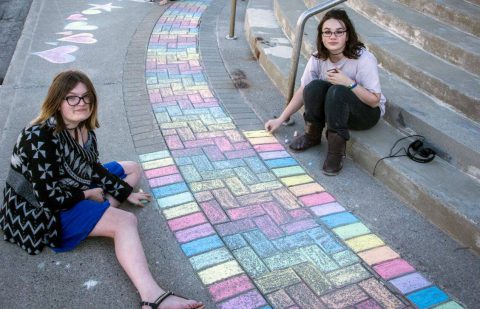 Recently, The Robert McLaughlin Gallery made the decision to step away from Pride Durham in organizing RMG Fridays: Pride. The RMG is committed to building and maintaining safe and accessible space so that the arts can be shared and enjoyed with the entire community. We also works closely with members of our communities, representative organizations, […]

By Stephanie Pollard “There are only two mistakes one can make along the road to truth: not going all the way, and not starting.” – The Buddha February’s RMG Fridays touted #BlackExcellence as artists shared their perspectives on what it means to belong. Partnering with the Durham Black Educators Network (DBEN), the gallery became a […]