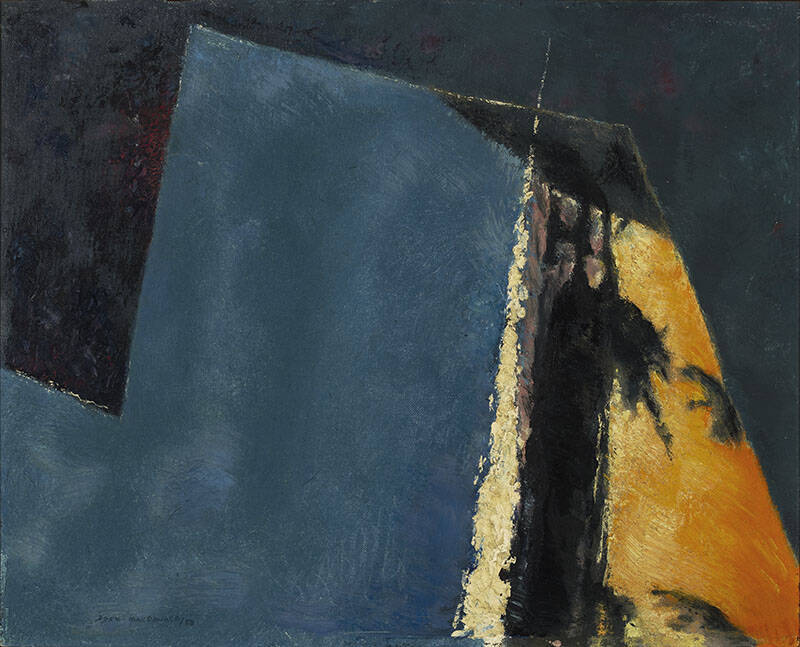 Rolling Canadian hills dominate the walls of Robert McLaughlin Gallery’s (RMG) main gallery space. In a corner, tiny fish can be seen swimming through space while totem poles hang on the opposite side of the room.

As part of the gallery’s Talk and Tour series, curator Linda Jansma took the public through a look into the career and life of one of Canadian’s prominent painters Jock Macdonald in Jock Macdonald: Evolving Form.

Jansma said the exhibit came together through a long process that began in spring 2011.

“This exhibit traces the artistic transition [Macdonald] underwent,” said Jansma. “His career as an artist journeys in a perpetual state of evolution.”

In 2012, Jansma was in the process of writing a grant to receive funding from the Department of Heritage for the exhibit when she received a strange email.

He asked Jansma about the collection of Macdonald pieces at the RMG for an exhibit he was curating at the Edinburgh Gallery in Scotland. During their correspondence, he notified Jansma about 40 letters written by his uncle stored in the Scottish gallery’s archives.

This was the missing piece to Jansma’s puzzle, she said. That fall, she took a five-day trip to Scotland to view the letters. The content of the letters led her to uncover the lost work of Macdonald.

She explored the various styles and periods of Macdonald and brought back with her paintings, drawings and methods unseen before by Canadian audiences.

Macdonald was born in 1897 in Thurso, Scotland. After his time in the army, he studied design at the Edinburgh College of Art. Macdonald immigrated to Canada in 1926 to take up a teaching job as head of design at the Vancouver School of Decorative and Applied Arts.

One of his greatest contributions is as a founding member of Toronto-based abstract group, Painters 11 formed in 1953.

In the early stages of his career, Canadian Group of Seven member Lawren Harris’s work inspired Macdonald to paint abstract landscapes. This influence is visible in his work In the White Forest, 1932. This piece, among 92 other original works, is currently up in the RMG.

“Intuitively artists create within the structural forms of nature,” is a quote from Macdonald posted above his landscape works in the exhibit. There is a notable predominance of nature as his main influencer in the majority of his work, Jansma said.

“Jock always painted the fourth dimension of nature,” said Jansma. “It is how we’re suppose to feel about it, not how we see it.”

In the 1940s, Macdonald met British surrealist artists Dr. Grace W. Pailthorpe and Ruben Mednikoff. According to Jansma, they taught Macdonald surrealist painting methods such as automatics. This technique involves painting in quick-paced series, and dating work down to the very time it was created. Macdonald was diverting away from his traditional landscape work and producing surrealist-style paintings such as Fish Family, 1943 included in the RMG exhibit.

Many art historians credit 1957 – 1960 as Macdonald’s pre-eminent years as a painter. During this time, he painted an average of 50 paintings per year until he died suddenly from a heart attack on Dec. 3, 1960.

Jansma described Macdonald as the “pioneer of post-war abstraction in Canada.” According to her, he had a substantial influence on Canadian painters then and in future generations.

Bowmanville painter Pete Smith credits Jock Macdonald as one of his biggest influences and the catalyst to his current exhibit Postscript in Gallery A, located in the lower half of the RMG.

Smith told the RMG his exhibit is “an aesthetic research project into the work and life of Jock Macdonald. In this sense, it will function as a postscript: a sprawling, artistic labyrinth of additional information and my idiosyncratic response to the concurrently held exhibition, Jock Macdonald: Evolving Form.”

Evolving Form is the first major retrospect of Macdonald’s work in more than 30 years and can be viewed at the RMG until May 24.