This holiday season, visit the RMG as we celebrate Rogers Hometown Hockey in Oshawa with a special display in our lobby! We have gathered together artworks and historical photographs from our collection, as well as incorporated a display of hockey-inspired artwork by Peterborough artist Jeffrey Macklin. Learn more about the display below and visit us with your family (and hockey fans)!

Photos from the Thomas Bouckley Collection:

Dupont Hockey Team, 1919
Eleven team members pose for their photograph on the open-air ice rink at the General Motors plant at Division Street and Elgin Street. This hockey team was the American Championship Team, 1919-20. 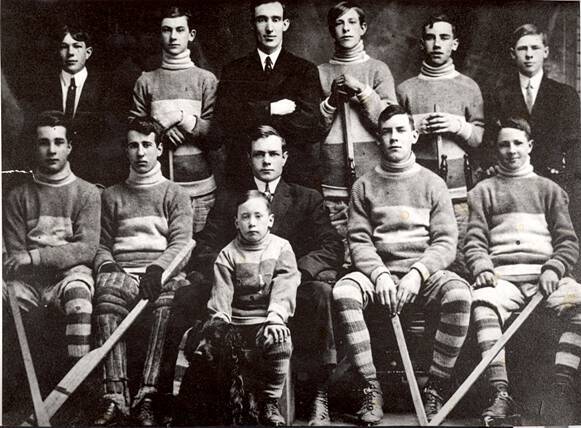 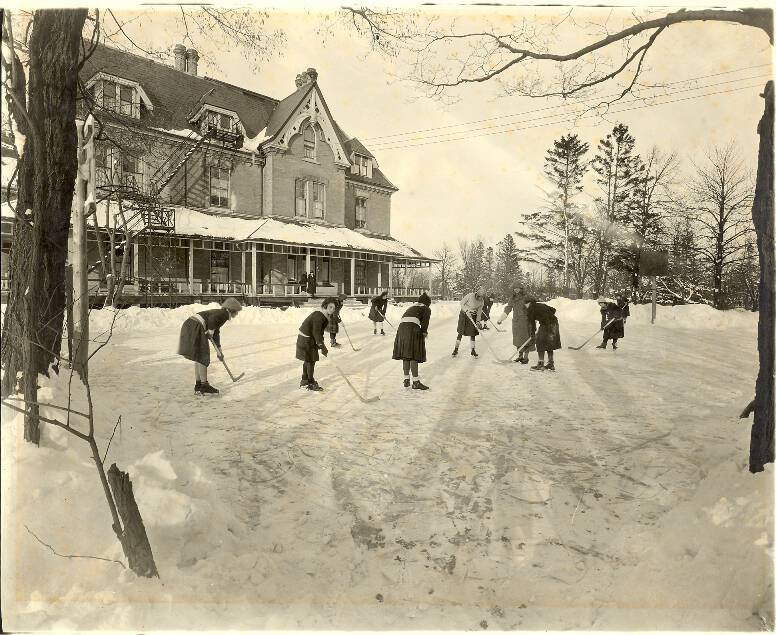 Sculpture from our Collection

The Save
Donna Gordon (Canadian, b. 1942)
painted papier-maché with wood, stainless steel
1992

“Donna has embraced the often misunderstood and little known art of papier maché. She feels the medium has, as yet, untapped potential for creative expression and innovation. She believes that…paper maché is a building process that artistically evolves, growing almost organically to take on a shape which is meaningful to both the artist and her audience.” – The Russell Gallery of Fine Art

Jeffrey Macklin is a Peterborough based artist, working primarily with relief printing (letterpress) and mixed media. He often employs words as visual triggers, as well as Canadiana and present-day/historical pop-culture icons and figures in both his print work and his mixed media pieces.

Macklin prints relief from the raised surfaces of hand-set wood and lead type. When he requires an image for a broadside or chapbook project, he carves from lino-block, plywood or end-grain hardwood. He also uses old neglected wood boards and rough cut plywood for backgrounds or texture, and in 2014 he begun using found hockey pucks.

Hockey pucks are resilient, pliable, and easy to carve. Printing from the surface of unusual materials has always been a primary driver in Macklin’s letterpress shop.

Rogers Hometown Hockey is coming to Oshawa City Hall over the holidays. The free hockey festival will wrap around City Hall, the McLaughlin Branch of the Oshawa Public Libraries and The Robert McLaughlin Gallery (RMG).

The Rogers Hometown Hockey crew will roll into Oshawa on Tuesday, December 22 to set up for the event. As a result, parking restrictions and road closures will be in effect. 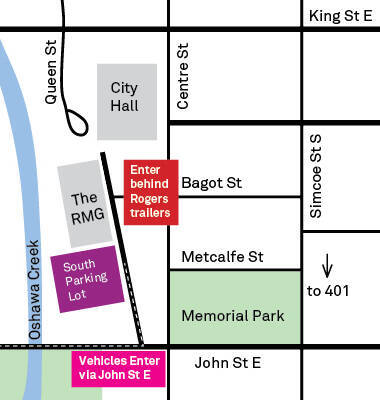 Thank you for your patience regarding these parking interruptions.
For more information on the Rogers Hometown Hockey festivities (December 26 & 27), visit www.oshawa.ca/RHH.