Art Police: Playing Around
Art Lab through end of August

Summer is one of the best times to play.

That’s just what four artists are doing this summer in RMG’s Art Lab, a space designed for experimentation and exploration. It’s located on the first floor.

Rebecca Casalino, Caroline Popiel, Claudia Rick and Andrea Aleman-Pastor, all recent graduates of the University of Guelph’s studio art program, make up the art collective Art Police. They will be playing around during their residency in the glass-walled lab through the end of August.

But it won’t be all fun and games. They are planning a look at childhood but with a twist, a tinge of adulthood.

They consider themselves in a good position to take a fun, edgy look at childhood.

“The thing is you graduate, you’re in this limbo” between childhood and adulthood, Popiel said. 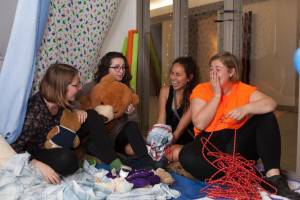 Up first is a blanket fort, complete with blankets, sheets and stuffed toys, but with a construction crew twist. This will be followed by a community gym and then a playground, perhaps with an outdoor component.

True to the idea of the Art Lab, the four artists will concentrate on building installations, having fun and exploring.
“We’re planning to be hanging out in here doing things,” said Casalino.

And everyone is welcome to visit. In fact, the artists are hoping to see a row of nose prints smudging the windows, from the children in the summer art camps, and to get inquiries from adults.
“I think it should be a little confusing,” Rick said.

Aleman-Pastor said it’s “really important for people to see the artists at work,” to see what studio work and space means to artists.

People should expect a healthy dose of humour from the Art Police.

“We love over the top here,” said Popiel. “We’re always trying to do something cheesy.”

The four women, who met at university, have been working as a collective for two years, and creating projects for one.
Casalino had applied to the RMG for a show last year but the collective wasn’t accepted. Instead, the artists were offered this residency. They’ve been planning and collecting material (they admit to being hoarders) since last October.

With commutes and part-time jobs, the artists won’t all be at the Art Lab at the same time, but someone should be there at least four days a week.
The artists will document their residency online, through Facebook at ART POLICE and Instagram at art.police.collective and tumblr at artpolicecollective.tumblr.com .