There is a rich sense of history behind the photographs in the Thomas Bouckley Collection. Each work freezes a moment in time that captures the unique history of Oshawa and how the city is constantly changing. 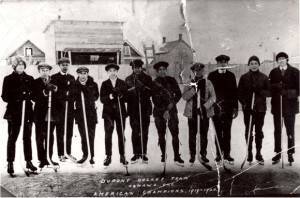 From historic buildings to events that shaped Oshawa, this collection comprises of photographs taken by Bouckley, photos from his father’s collection and found photographs, in addition in recent years there has been many donations from the community to the Thomas Bouckley Collection. Like Bouckley himself, they all wanted to preserve this history and by contributing their personal photographs they’ve done just that.

Thomas Llewellyn Bouckley was born in Blackpool, England, in 1904 to Aubrey Llewellyn (Mike) Bouckley and Elizabeth Moss, Thomas Bouckley came to Oshawa with his family as an infant. The Bouckley’s immersed themselves in the history of their new home, specifically the in the oral history of Oshawa. Thomas Bouckley began to develop an extensive level of expertise about Oshawa and the surrounding area and was an early member of the Oshawa Historical Society.

The Scugog Carrying Place was a set of paths used by Aboriginal peoples and early settlers to travel around Durham Region. These paths are considered to be the foundation for Oshawa and neighbouring cities and towns.

Bouckley speculated a French trading post where Benjamin Wilson, the first known settler in Oshawa, resided in was actually Cabane de Plomb, a known part of the Scugog Carrying Place. This post was located 150 yards east from Oshawa Pioneer Cemetery in what is now known as Whitby. 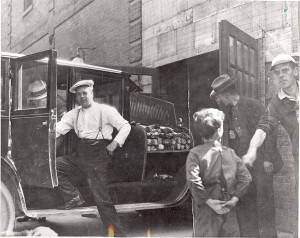 Through the power of oral history and photography, Bouckley continued to help tell the story of Oshawa. Like his father, he began photographing Oshawa in order to preserve the city he knew and loved. This passion for history and storytelling is what lead to what we now know as the Thomas Bouckley Collection.

Originating from Bouckley’s deep admiration for his father’s photographs depicting scenes, people and infrastructure from Oshawa’s past this array of work has grown from telling one man’s story to telling an entire city’s.

The Thomas Bouckley Collection was gifted to the Robert McLaughlin Gallery in 1985, three years before Bouckley’s death at age 84, and sits at more than 4000 photographs. The RMG continues to tell Bouckley’s account of Oshawa then to now and maintains his legacy by collecting images from the city’s bustling past. From WWI to the opening of the beloved Wilson Furniture, which is still in business today, each photo in Bouckley’s collection tells well over it’s 1000 words worth of history.

Raechel Bonomo is a writer and Oshawa-native. As a journalism-grad, Raechel looks to tell stories in various forms about various topics. Her lifelong love affair with art fuels her freelance writing but, by day, she works as the editorial coordinator for a conservation organization.

In her free time, she can be found either wielding a paintbrush or trekking through the unbeaten path in a forest somewhere in southern Ontario.