On Thursday, Feb. 16, a group of gallery friends and present and former staff hit the Rewind button to remember the half-century of history of the RMG. 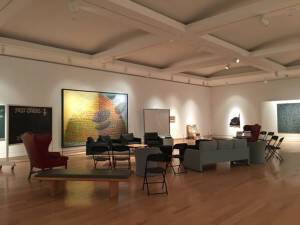 The intimate event was held in the Isabel McLaughlin Gallery, transformed into a cozy living room with comfortable chairs, sofas and ottomans, against a stunning backdrop of works by local artists.

People shared their memories of the RMG in what CEO Donna Raetsen-Kemp described as “a casual evening of sharing stories.” There were laughs, many nods of agreement and even some surprises throughout the evening.

Elizabeth Sweeney, manager of public programs, got things started with a brief history of the RMG. The regional gallery, which contains the largest collection of the Painters 11 in Canada, had humble beginnings in 1967 in a commercial space on Simcoe Street South, the site of an exhibit by local artists organized by Oshawa designer William Caldwell.

Donald Dodds, former member of the gallery board, practised law in the same building as Caldwell’s office.

“I can remember when he decided that something should be done about an art gallery in Oshawa,” he said.

He added Caldwell shut down his office for months in order to work on creating the first gallery.

“It was really, really a dear little gallery.”

The artistic enterprise got the support of artist Alexandra Luke and her husband, Ewart McLaughlin, grandson of Robert McLaughlin, founder of the McLaughlin Carriage Works.

The original gallery was built on the side of the Oshawa Creek, set back between City Hall and the McLaughlin branch of Oshawa Public Libraries, in 1969 and named for Robert McLaughlin.

Local artist and long-time volunteer Jane Dixon said Caldwell had gone into the Art Gallery of Ontario for advice on building a gallery in Oshawa. He was told the best way of doing this was from the top down, not the bottom up as the Oshawa group was doing, she said. They ignored this.

“They were real pioneers and fought for something they believed in,” she said.

Sweeney talked about “the two key women” in the RMG’s development, Luke, a member of the Painters Eleven, and Isabel McLaughlin, a modernist artist and daughter of Robert’s son, R.S. “Col. Sam” McLaughlin. Both artists provided support in terms of funds and donations of art from their private collections.

The gallery took its cue from Luke and built its permanent collection around abstract art.

Jansma remembered visiting the gallery when she was an art history student. She was doing a paper on the Painters 11 and wanted to photograph the art. The preparator at the time obliged “and took them out and put them in the backyard so I could photograph them.” 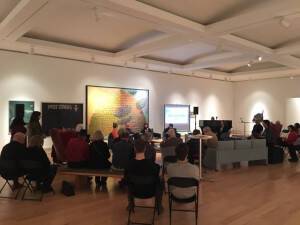 Artist Sean McQuay, who worked at the gallery as associate installer and evening security guard after high school, remembers a Painters Eleven artist attending to help install his works for a major exhibit but being dissatisfied with the results.

The artist came back the next day with his oil paints and “fixed” his paintings, McQuay said.

“Joan (Murray, director at the time) didn’t know what to do. We were shocked. By the time he left, he had altered them,” McQuay said.

Dedicated volunteers helped the RMG, said Dixon. She spoke of the “many, many schemes” the volunteers came up with to raise funds, including Art Mart, a popular arts and crafts sale, fashion shows, auctions and lunches.

“We all became good friends, the volunteers.”

Volunteers continue to help support the RMG, providing thousands of hours of service and running the Gift Shop.

Those attending RMG Rewind also ventured into the dark side, watching a film about reports of ghosts in the gallery.

“The place is haunted,” McQuay said.

While he worked in the original building, he refrained from using one staircase on his security rounds because “I’m positive there was a spirit in the corner.”

On that note, Gordon Dowsley said a group came to the board about 10 years ago, explaining the feng shui of the gallery “was out of whack.” The group suggested jacking up the building and rotating it 90 degrees, he said.

“They couldn’t understand the directors’ reluctance to jack the building up and rotate it,” he said to laughter.

Over the years, the RMG has grown to include a permanent collection of more than 4,500 works, with changing contemporary and historic exhibits in five galleries, a collection of historic photographs of Oshawa and area, an education program and popular cultural events such as RMG Fridays.

Join us on June 25th as we celebrate the gallery’s 50th birthday at our Strawberry Social Birthday Party. Stay tuned for event details!

Christy Chase is a long-time resident of Oshawa, a writer, and former reporter and editor with local newspapers. She now enjoys exploring her artistic side at the RMG.