This post is from the desk of Linda Jansma, Senior Curator.

I experienced an interesting art crossover a couple of weeks ago during Toronto’s Luminato Festival. We had purchased tickets for The Life and Death of Marina Abramovic when they first came out last fall and were looking forward to the North American debut of Robert Wilson’s take on the life of the internationally renowned performance artist. We went into Toronto early on Saturday after realizing that the AGO’s Revealing the Early Renaissance exhibition was closing and this would be the final opportunity to take in the opulence of early 14th century Florentine art. 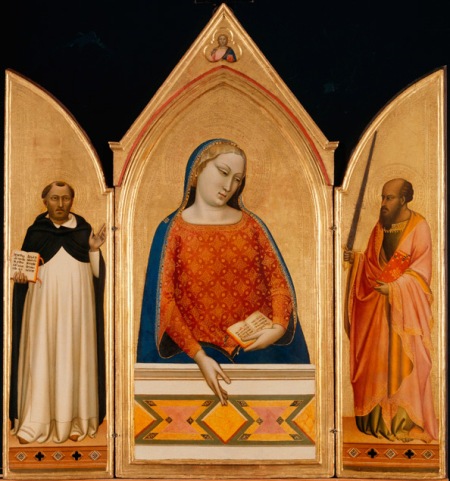 The Virgin Mary with Saints by Bernardo Daddi

The Renaissance exhibition was beautiful in every way—the crucifixes, manuscripts, alter pieces, stained glass—hard not to find something that wasn’t worthy of contemplation. The installation, of course, lent itself to a considered study: benches that resembled pews, rich wall colour from which the gold leaf shone, and heavenly choral music drifting through the spaces. The stage was expertly set.

Not unlike Wilson’s adaptation of Abramovic’s life. When entering the theatre, three “Marina’s” were lying in repose on coffin-shaped structures with three Doberman Pinschers wandering around and through the sarcophagi. Talk about setting the stage. From there the story unfolded, expertly narrated by Willem Dafoe, of Abramovic’s survival of her cruel mother and eventual rise to the highest respect of the international art world. There was heart-wrenching tales of physical and emotional abuse endured by the respected performance artist known for her incredible feats of endurance (her most recent performance at the Museum of Modern Art where she sat facing various visitors for 736 hours and 30 minutes—every hour that the museum was open during the run of her retrospective exhibition, comes to mind. It was simultaneously unnerving and fascinating to watch her motionless engagement).

The interesting thing was some of those crossovers that I mentioned at the beginning of this blog. Both the exhibition at the AGO and Abramovic’s performance were visually lavish, demanding the audience’s full attention. The narratives were similar: Abramovic’s suffering could easily be equated to Christ’s as well as his followers. In the latter case some of the renaissance artists seemed to relish depicting the decapitation and stabbing of the saints, while Wilson did not shy from the various forms of abuse heaped on Abramovic by her mother. It was one of the final scenes in the stage performance that was strikingly similar to the AGO’s exhibition. Three “Marina’s” were suspended above the stage, arms outstretched in obvious crucifixion fashion. Then the red-dressed artist was rolled across the stage on a platform (more visual spectacle!). Having experienced the Renaissance in the morning, it was difficult not to see Abramovic’s “resurrection” from her past life, one which she left through the endurance of her symbolic crucifixion.

Revealing the Early Renaissance: The Art

About Revealing the Early Renaissance via Globe and Mail

About the exhibition Marina Abramovic: The Artist is Present

About the documentary film Marina Abramovic: The Artist is Present